The High Cost of Living with Inflammatory Bowel Disease

Receiving the news that you’ve been diagnosed with a chronic illness is never easy. Your head is spinning with questions on treatment plans, how it will impact your quality of life and your family. Wondering “How much is this going to cost?” is typically the thought that follows close behind.

IBD In America 2018, a syndicated survey conducted by Health Union, revealed that 41% of people with inflammatory bowel disease (IBD) say their household finances are significantly impacted by the out-of-pocket costs associated with their condition.1 The survey gathered insights from 2,800 patients who have been diagnosed with a type of IBD, such as Crohn’s disease, ulcerative colitis and indeterminate colitis. 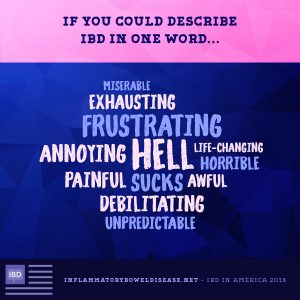 “The financial burden of this disease has been the number one worst thing about this disease as a whole, and my disease is classified as moderate-severe,” wrote an anonymous survey respondent. “This disease has been made to feel like credit card debt I accumulated on my own and I alone have to burden the punishment and costs of fixing it. It’s impossible – a never ending uphill battle.”

IBD patients feel the frustration of spending a significant amount of time and money on their journey, and survey results uncover three of the major factors that contribute to the negative financial impact they report.

On average, IBD In America 2018 respondents say it took an average of nearly six years to be diagnosed. IBD brings a variety of symptoms that often accompany other health conditions, so a diagnosis may take some time. Additionally, many people with certain types of IBD are diagnosed young and live with the condition for many years—14% of survey respondents with Crohn’s disease were diagnosed prior to age 18. 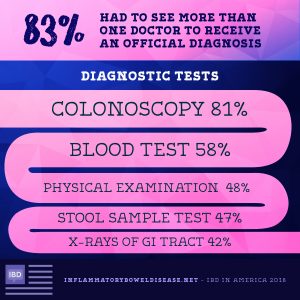 Since a diagnosis can be difficult to pinpoint, 83% of respondents had to see more than one doctor to receive an official IBD diagnosis and, because of the uncertainty, underwent several diagnostic tests in the meantime. Eighty-one percent of respondents had a colonoscopy, 58% a blood test, and a little under half of patients also were given physical examinations, stool sample tests and X-rays of their GI tract. The road to diagnosis is long and, therefore, can be costly to many patients.

“Not only does no one with a chronic illness want to be saddled with a disease but we often have to spend a ton of money on dealing with it,” writes Marisa Lauren Troy, a contributor for InflammatoryBowelDisease.net (which recently transitioned from CrohnsDisease.com in an effort to better serve the various needs of the community). “The financial stress of the bills that continue to keep piling up because of non-stop health related things can add so much stress to not only the patient but the entire family, as well.”

IBD In America 2018 also revealed that only 23% of respondents felt their IBD was controlled, and their satisfaction with their current treatment plan was low, which could certainly mean even more doctor’s visits, tests and new treatments.

Being Sick is a “Full Time Job”

Anecdotally among Health Union’s community members on InflammatoryBowelDisease.net and its corresponding Facebook page, it’s understood that many people who suffer from a form of IBD cannot work. This not only makes it difficult to afford insurance, but also makes it hard for others to understand that not being able to work isn’t a good thing. Contributor Shawntel Bethea writes, “People would assume that because I was out of work (on disability), that I was somehow better off. As if the job is more difficult or complicated than what I was going through.”

“This is a horrible debilitating disease, then have to battle SSA for funds just to cover basic necessities of life!”

“I hate being disabled. I miss going to work everyday and EARNING it.”

“I told my boss, ‘I doubt if I could work 5 hours straight.’ he just laughed.”

Discover the newest survey insights from IBD In America 2019 here.