— Unseen Symptoms Frustrating to Explain to Others —

Explaining the “invisible” aspects of psoriatic arthritis often presents a challenge, according to “Psoriatic Arthritis In America,” a newly released Health Union survey of patients diagnosed with the condition.

Survey respondents said they often experience difficulty in making others understand that despite a lack of outwardly visible symptoms, they have a chronic condition that can cause fatigue and affects their entire body.

Psoriatic arthritis (PsA) is an inflammatory disease closely related to and most often co-occurring with psoriasis. The most commonly reported symptom among respondents was fatigue (94 percent), but other symptoms include pain, swelling and stiffness of the joints, and inflammation and pain of ligaments and tendons at attachment points.

Seventy-three percent of patients said they had experienced flares at least monthly, with flares lasting several weeks. Those experiencing frequent (i.e., daily or weekly) flares described the condition as “painful,” “frustrating,” and “debilitating.” 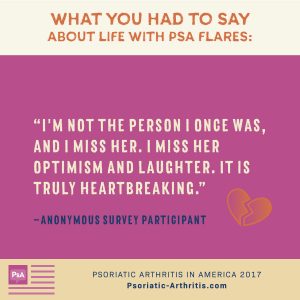 “We see a recurring theme – a desire for people with PsA to have more information about the condition and its impact – in our ‘Psoriatic Arthritis In America’ surveys,” said Health Union CEO and Co-founder Olivier Chateau, “which is why it is important to have an online community like Psoriatic-Arthritis.com where people can share their experiences, learn from one another, and find information on the latest treatments.”

A summary infographic of the results is available and additional details about the survey can be provided upon request. Email Insights@health-union.com for more information.