— Patients and Caregivers Can Benefit from New Online Community —

An accurate diagnosis for Parkinson’s disease is often complicated and delayed by an array of symptoms resembling other conditions, according to a new survey from Health Union.

The survey involved more than 1,100 individuals currently living with Parkinson’s disease and was released through Health Union’s newest online community, ParkinsonsDisease.net.  It finds patients are frustrated in coping with and treating a complex condition that encompasses many diverse symptoms.

As many as one million Americans are living with Parkinson’s disease, a chronic disorder of the central nervous system that slowly worsens over time. Nerve cells in the brain die or become damaged, affecting levels of dopamine. It manifests with motor symptoms; such as diminished ability to move, tremors at rest, limb stiffness, and impaired balance. Non-motor symptoms may also be present, including reduced ability to smell, difficulty swallowing, pain, depression, and cognitive problems.

Survey respondents reported experiencing a variety of symptoms prior to diagnosis. Tremor or shaking was the most common at 72 percent. Other reported symptoms include: changes in walking or difficulty walking (42 percent), changes in handwriting called micrographia (40 percent), fatigue (37 percent), and reduced ability to smell (31 percent). Many of the symptoms, including tremor, can be present in other conditions, which can lead to misdiagnosis. About one-third of respondents initially received an improper diagnosis, including essential tremor (31 percent), depression/anxiety (27 percent), and benign essential tremor (15 percent). 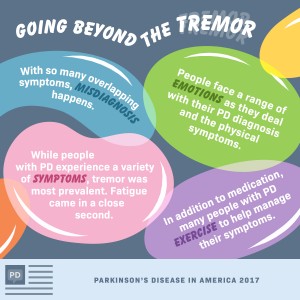 “I was officially diagnosed at age 32, but I had begun to see symptoms at 29,” said ParkinsonsDisease.net patient advocate Allison Smith. “I had difficulty getting a Parkinson’s diagnosis because I was so young. When something was wrong, I was told I had injured myself or that I had overworked myself in graduate school. This is a frustrating time and you almost feel like you are losing your mind because the doctors can’t figure out an accurate diagnosis.”

On top of the difficulties they present for diagnosis, Parkinson’s symptoms can make life extremely challenging; 80 percent of survey respondents saying they felt scared about their future.  In addition, respondents had painful spasms or muscle cramps (59 percent), felt depressed (59 percent), had trouble concentrating (58 percent), and had trouble getting around outside their home (46 percent).

ParkinsonsDisease.net caregiver contributor Angela Robb notes that “frustration can happen on many levels. For example, with facial masking, the lack of facial expression due to Parkinson’s makes it extremely hard for caregivers, families, and loved ones to communicate effectively. One can literally think a loved one with Parkinson’s is angry or sad because they cannot move their facial muscles or not hear them because of low speech volume.”

“The results of this survey underscore the reasons Health Union launched ParkinsonsDisease.net earlier this year,” said Tim Armand, President and co-founder of Health Union. “It is a privilege to provide a place where patients can get information and support for dealing with this life altering condition. In addition to meeting needs for patient support, ParkinsonsDisease.net provides specific resources for caregivers and family members.”

“It’s extremely important for caregivers and other loved ones to acknowledge that they need help,” Robb added. “Caregivers need to care for themselves. Joining an online community like ParkinsonsDisease.net is a great way to share your experiences and learn from others about coping with the stress of caring for someone living with Parkinson’s.”

An infographic series depicting the survey results is also available.

The Parkinson’s Disease In America 2017 survey was conducted online between January 19 and March 13, 2017. More details about the survey are available upon request; contact Insights@Health-Union.com.

Focused HCP discussion and proactive education on relapse identification and...